In a previous post's comments, we talked about Bayes rule and things like that. This got me wondering about the following question:

I feel like there have to be results along these lines, but I was unable to find them. My next attempt was to prove something, which failed miserably after a few hours.  So, as a good empiricist and lazy(/bad) theorist, I designed a simple experiment.

Let A and B be binary variables. Let's generate a random joint distribution p(A,B), which has four cells for the four possible combinations of values of A and B. From this, we can directly compute the true marginal p(A) and the true conditionals p(B|A) and p(A|B).

Note that the direction is q from p (chosen because p is the "true" distribution) and that this also has the advantage that the conditional KL is based on p(B), which (in this case) is known exactly and is "correct."

By analogy, for l1 distance we have:

Note that this last one might be slightly non-standard, but is parallel to the KL definition.

Okay, so now for the experiment. First I generate a random (uniform) true joint distribution p(A,B). I then run through 1,000,000 possible q(A,B), where each of the three sufficient statistics are chosen from [0.01, 0.02, ... 0.99]. I then conditionalize and marginalize these in all the relevant ways and compute KL. Finally, I generate plots like the following very representative example for KL: 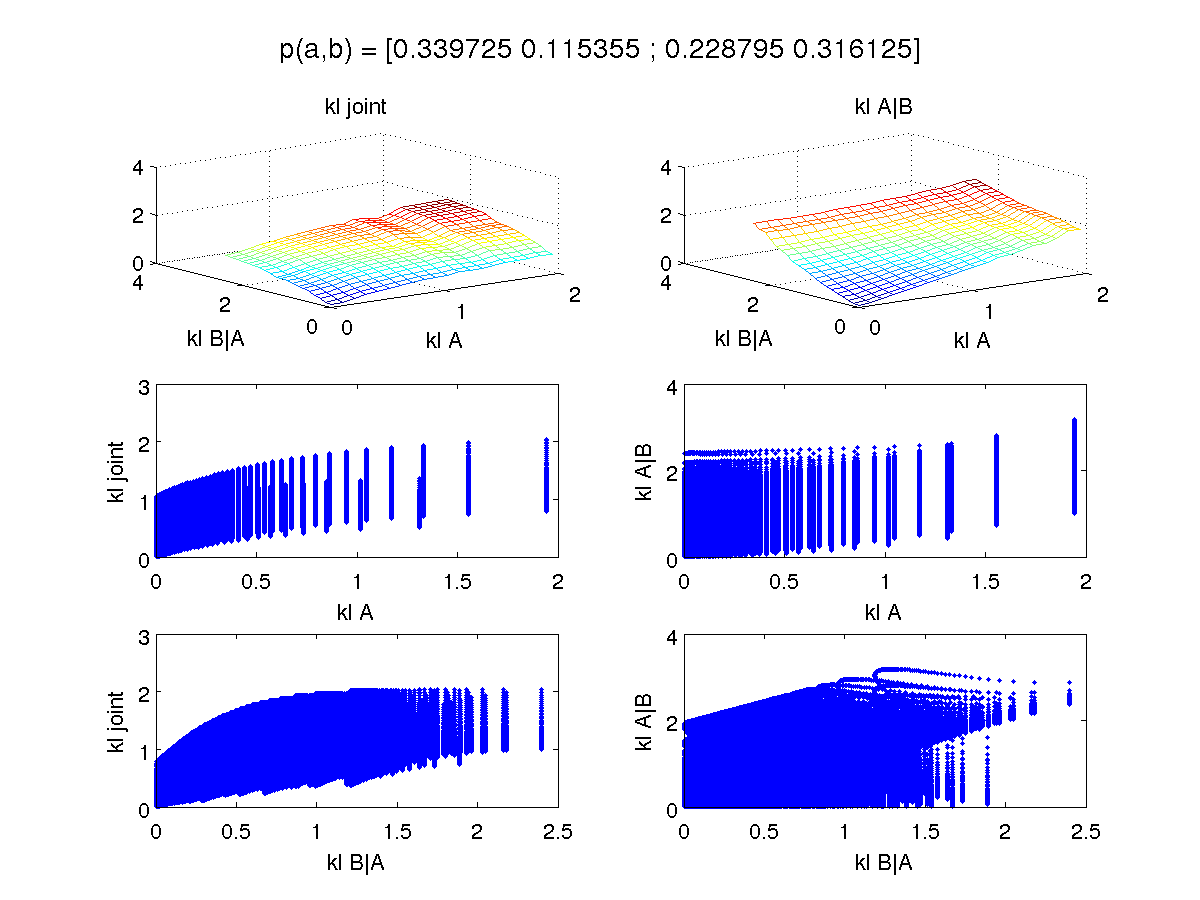 On the left column, we're inspecting the recovered joint distribution and in the right column the recovered conditional distribution. The top row shows: for different divergences of q(A) from p(A), and for different divergences of q(B|A) from p(B|A), how far is (left) the recovered joint q(A,B) from the true joint q(A,B), or how far is the (right) recovered conditional q(A|B) from the true conditional p(A|B). The middle row is the projection of this into two dimensions, focusing on the divergence in the marginal, and the bottom row is the projection onto the divergence in the conditional. The title shows what the true distribution is in the form [p(a,b) p(a,~b) ; p(~a,b) p(~a,~b)]. I chose this example because the joint has a correlation between a and b.

This example is fairly benign: as the approximations become worse, so do both of the recovered distributions, in a fairly linear way until a plateau. From the bottom row, you can see that it's more important to get the conditional right than the marginal (you can have a marginal that's quite far--eg., a KL of 1.5--and still get an almost perfect recovery of the conditional or joint, but this is not true for large differences in the conditional B|A.

One strange thing is that you often (for different true joints) see results that look like: 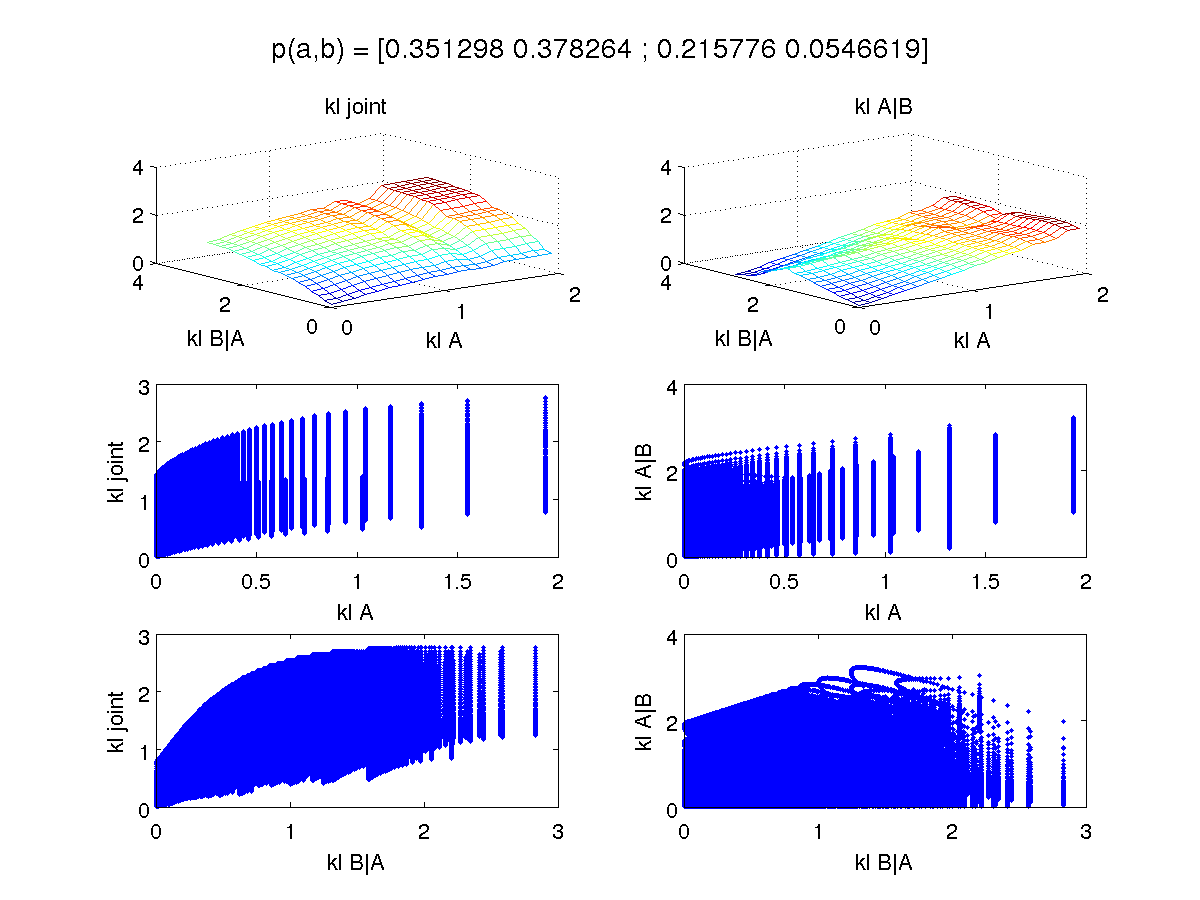 One can ask if this is an artifact of KL. So let's switch to L1 and variational for the first set of plots: 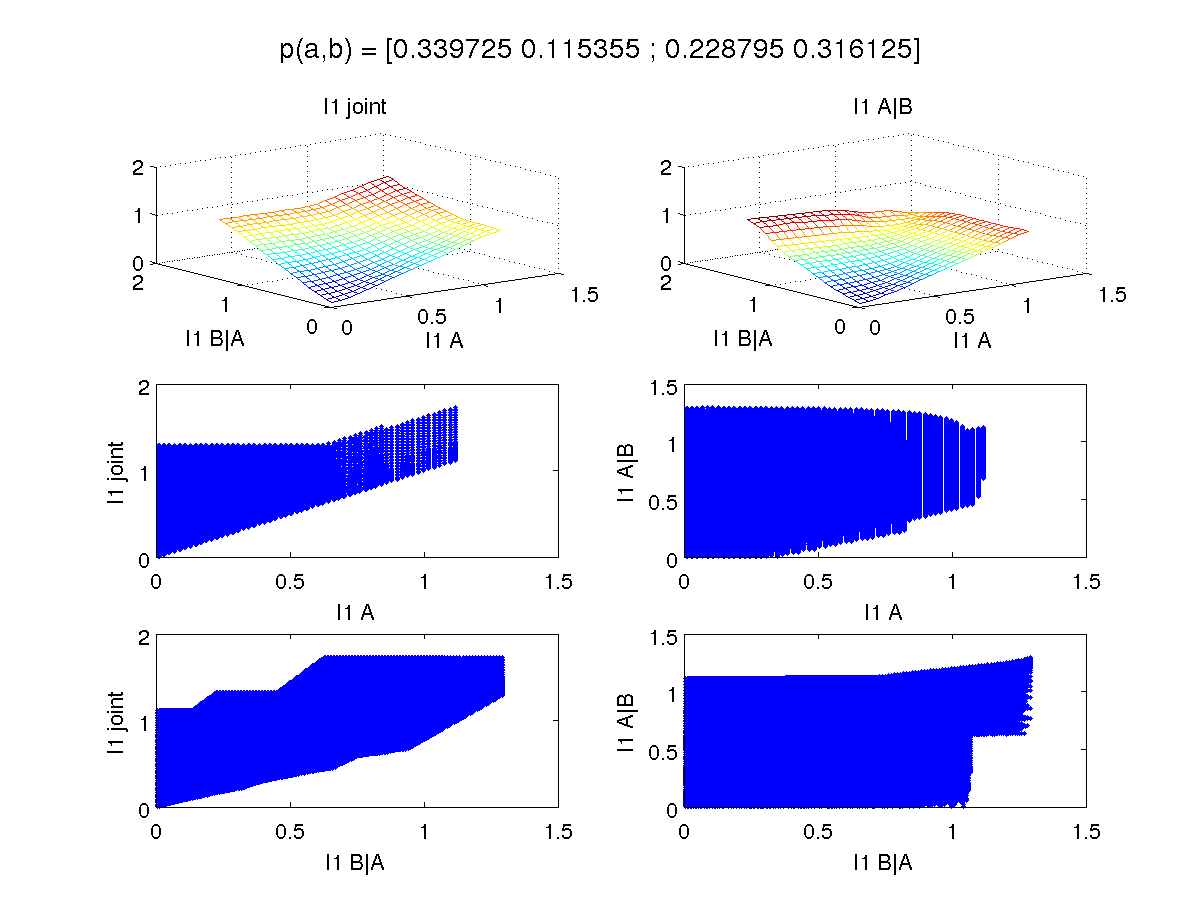 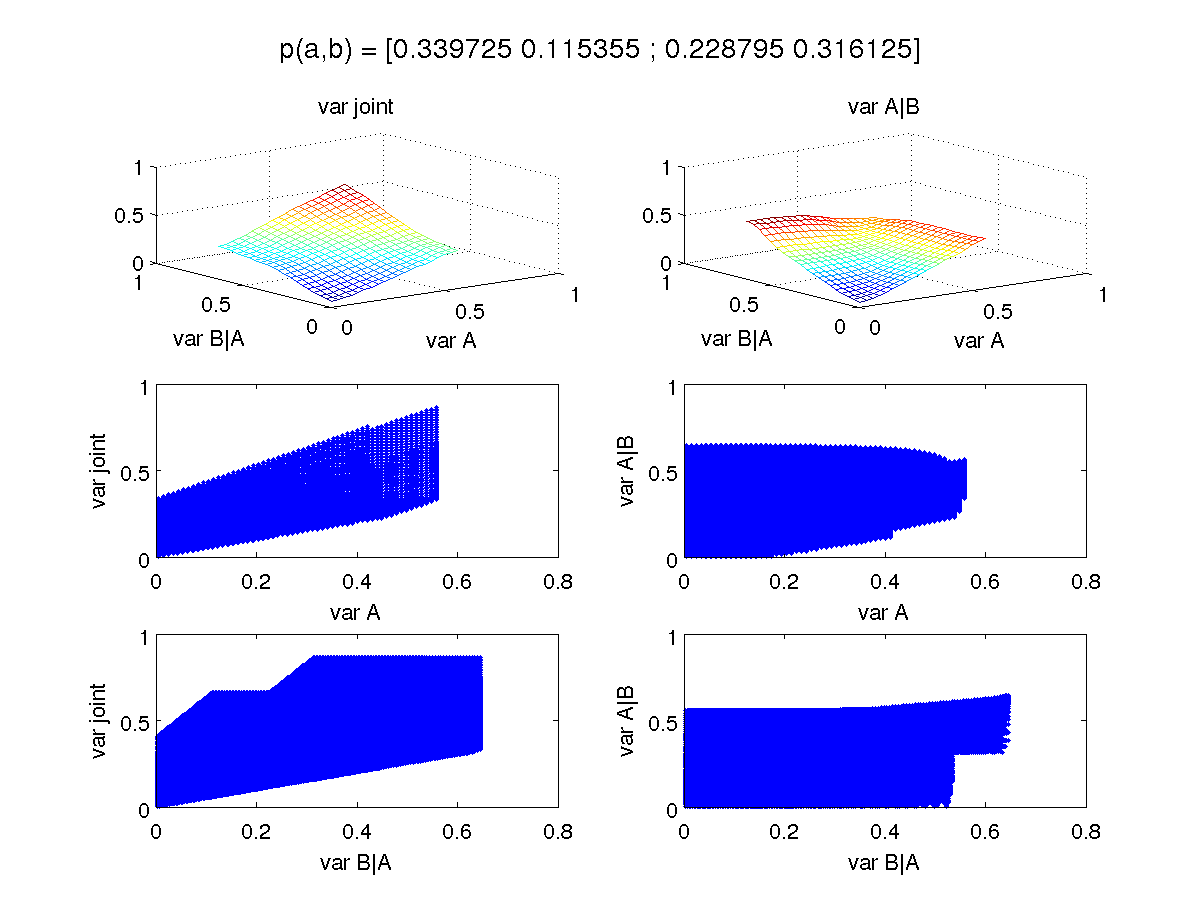 So, in both L1 land and variational land, you can do better on the conditional by being worse on the (other) conditional.

For the example that gave rise to the weird KL results, we have the following for L1: 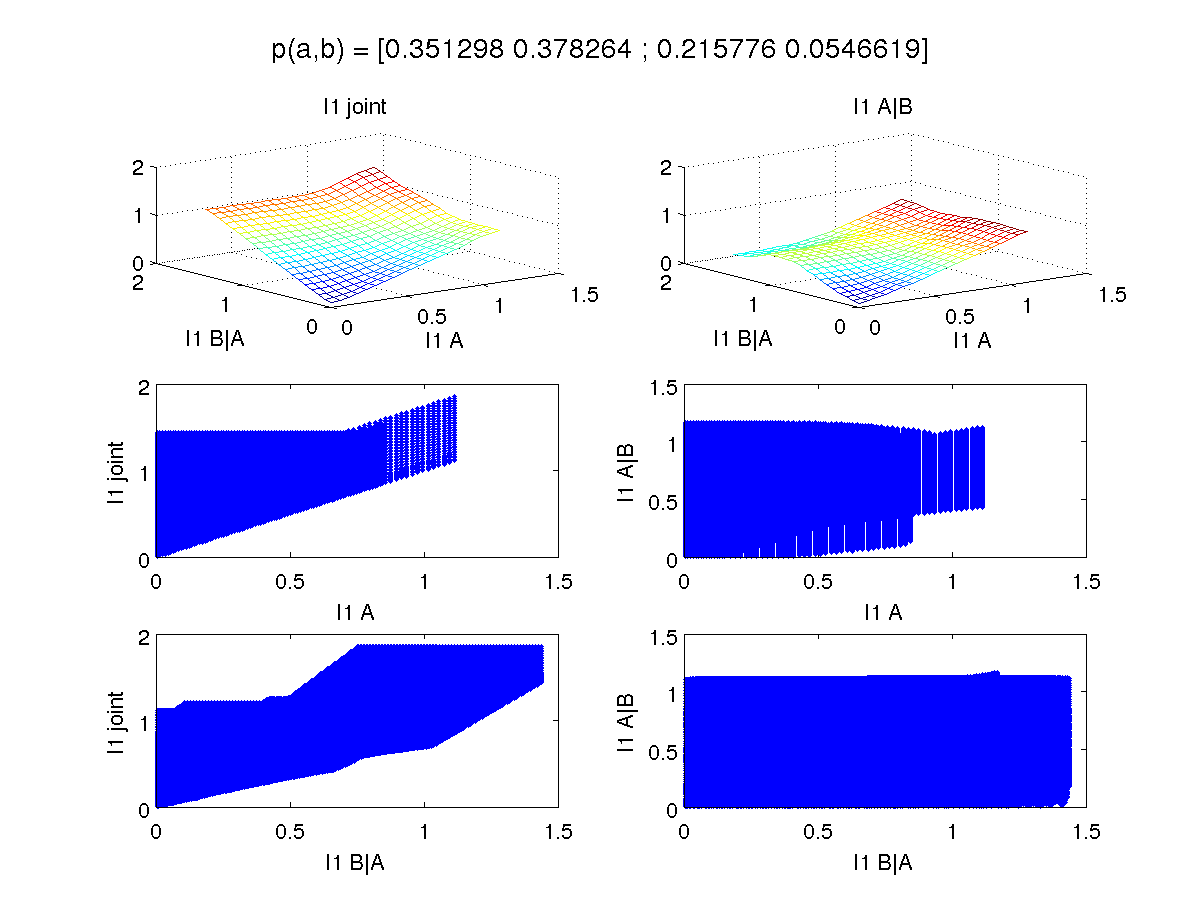 which shows almost an identical effect. For variational: 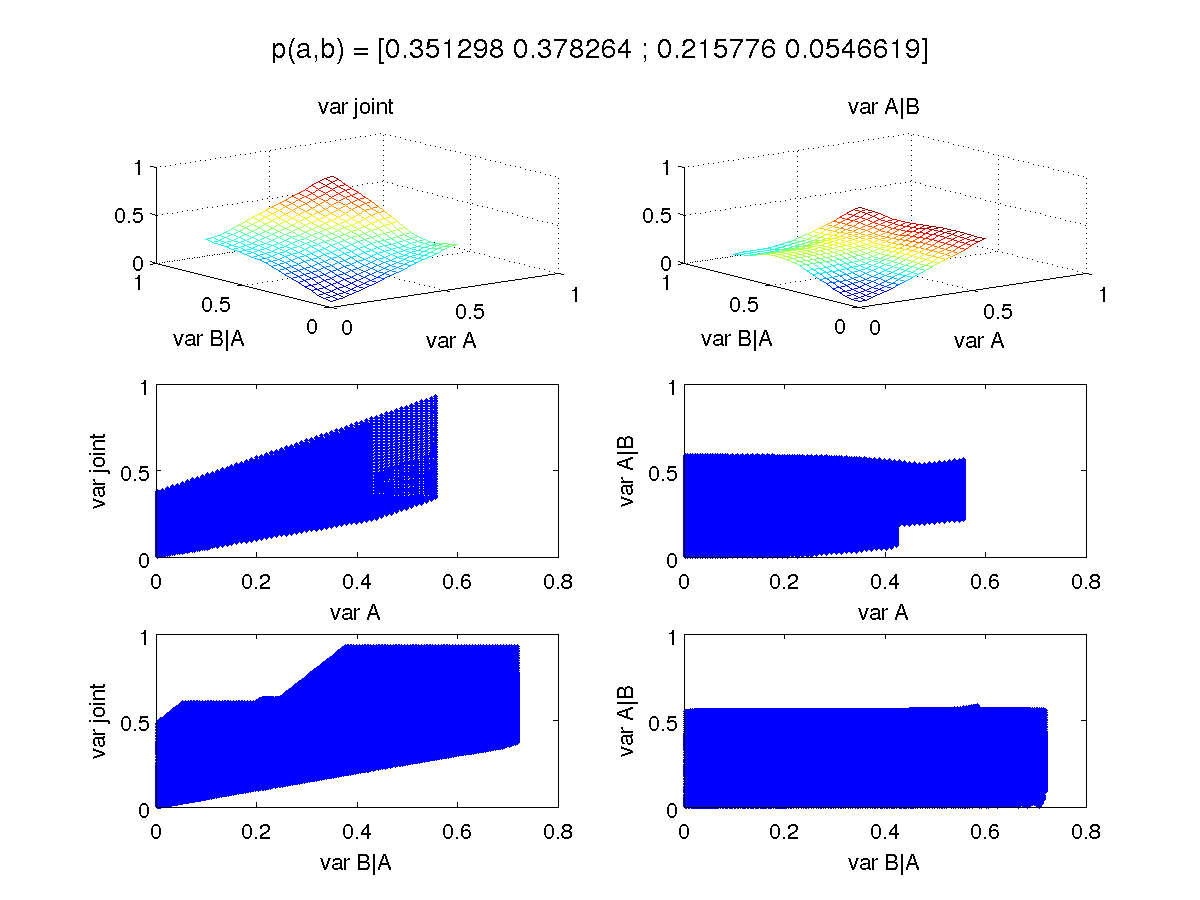 the effect is still the same.

During grad school, my advisor suggested I identify a recent grad who has been, to me, successful. I could then use him or her as a guide. I picked someone (he now knows who he is), and the exercise was useful: there are lots of ways to be successful in research land, and this helped me focus.

I'm fairly serious about yoga. I've had a lot of instructors over the years and noticed a high correlation between InstructorILike and InstructorWhoIsMale. Initially I believed this was because male instructors pushed more, and that worked for me. Over time I realized that was not the full story.

I spent two weeks going to classes by instructors I hadn't had before to try to understand what variable(s) made the difference. I've believe now that a large part of the reason I like male instructors is precisely because they're male. A female instructor would do some crazy pose and my brain would immediately say "I could never do that." A male instructor would do the same pose and my brain would say "If he can do it, so can I." (I'd then try and fail several times, but never with a defeatist attitude.)

I've heard for a long time that having role models you can identify with is important. As someone who has in almost all of my life fit into the overwhelming majority (white male in tech/academia), it's been rare that I've had the opportunity to really feel this effect for myself. I try to believe things even if they haven't happened to me, but it's always better when you can empathize rather than sympathize and it's easier to empathize when you've actually been there.

The first time I remember feeling the effect of a role model "who looks like me" was  at the 1996 Olympics and Poul-Erik Høyer Larsen (Denmark) was the first European to ever win the badminton semi-finals; he then won the gold medal against Dong Jiong (China). (This sport is dominated by Indonesia, China and Malaysia.) Growing up in a particular part of Los Angeles and playing badminton as a kid, I was very much an outlier. Even though I'd never heard for Poul-Erik before (everyone knew who Jiong was), his win gave me something I could aspire to.

A few years ago I began broadcasting my support of the LGBT community, e.g., an HRC link on my web page and painting my laptop. Since then I've gotten emails from several people (mostly students) effectively asking why there aren't more/any LGBT role models in our community. You can interpret "community" meaning anything in the NLP/ML to CS to Science/Tech range. My answer: I don't know. It's hard to even know how large this community is because, unlike things like race and (binary) gender, it's not always outwardly inferrable (with noise). These issues effect tech is nuanced ways; see for instance an interview with the founder of Lesbians Who Tech or Queer in STEM for more.

This is all to say that having role models is important, and yes, it does matter who they are, where they came from, and what they look like. It mattered to the high school aged version of me, the grad school version of me, and the associate prof version of me. I'm not saying anything new here, but for our field to be healthy, we need a large number of successful people who can be role models for all sorts of students (and beyond). Token visibility is not enough because a single example of some particular label won't match with everyone who self-identifies with that label. The person I chose was, yes, a while male. There were plenty to choose from. But I chose him, and others would not have sufficed.