[This post is based on some discussions that came up while talking about manifold learning with Ross Whitaker and Sam Gerber, who had a great manifold learning paper at ICCV last year.]
There are two assumptions that are often used in statistical learning (both theory and practice, though probably more of the latter), especially in the semi-supervised setting.  Unfortunately, they're incompatible.

The margin assumption states that your data are well separated.  Usually it's in reference to linear, possibly kernelized, classifiers, but that need not be the case.  As most of us know, there are lots of other assumptions that boil down to the same thing, such as the low-weight-norm assumption, or the Gaussian prior assumption.  At the end of the day, it means your data looks like what you have on the left, below, not what you have on the right. 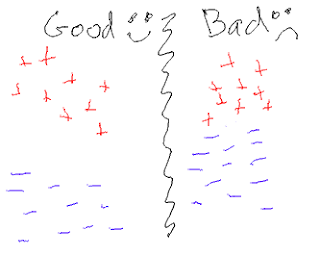 The manifold assumption that is particularly popular in semi-supervised learning, but also shows up in supervised learning, says that your data lie on a low dimensional manifold embedded in a higher dimensional space.  One way of thinking about this is saying that your features cannot covary arbitrarily, but the manifold assumption is quite a bit stronger.  It usually assumes a Reimannian (i.e., locally Euclidean) structure, with data points "sufficiently" densely sampled.  In other words, life looks like the left, not the right, below: 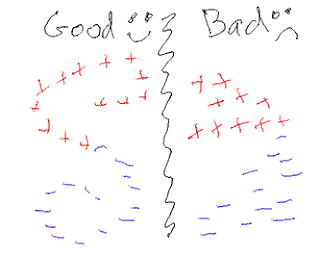 Okay, yes, I know that the "Bad" one is a 2D manifold embedded in 2D, but that's only because I can't draw 3D images :).  And anyway, this is a "weird" manifold in the sense that at one point (where the +s and -s meet), it drops down to 1D.  This is fine in math-manifold land, but usually not at all accounted for in ML-manifold land.

The problem, of course, is that once you say "margin" and "manifold" in the same sentence, things just can't possibly work out.  You'd end up with a picture like: 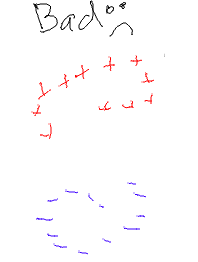 This is fine from a margin perspective, but it's definitely not a (densely sampled) manifold any more.

In fact, almost by definition, once you stick a margin into a manifold (which is okay, since you'll define margin Euclideanly, and manifolds know how to deal with Euclidean geometry locally), you're hosed.